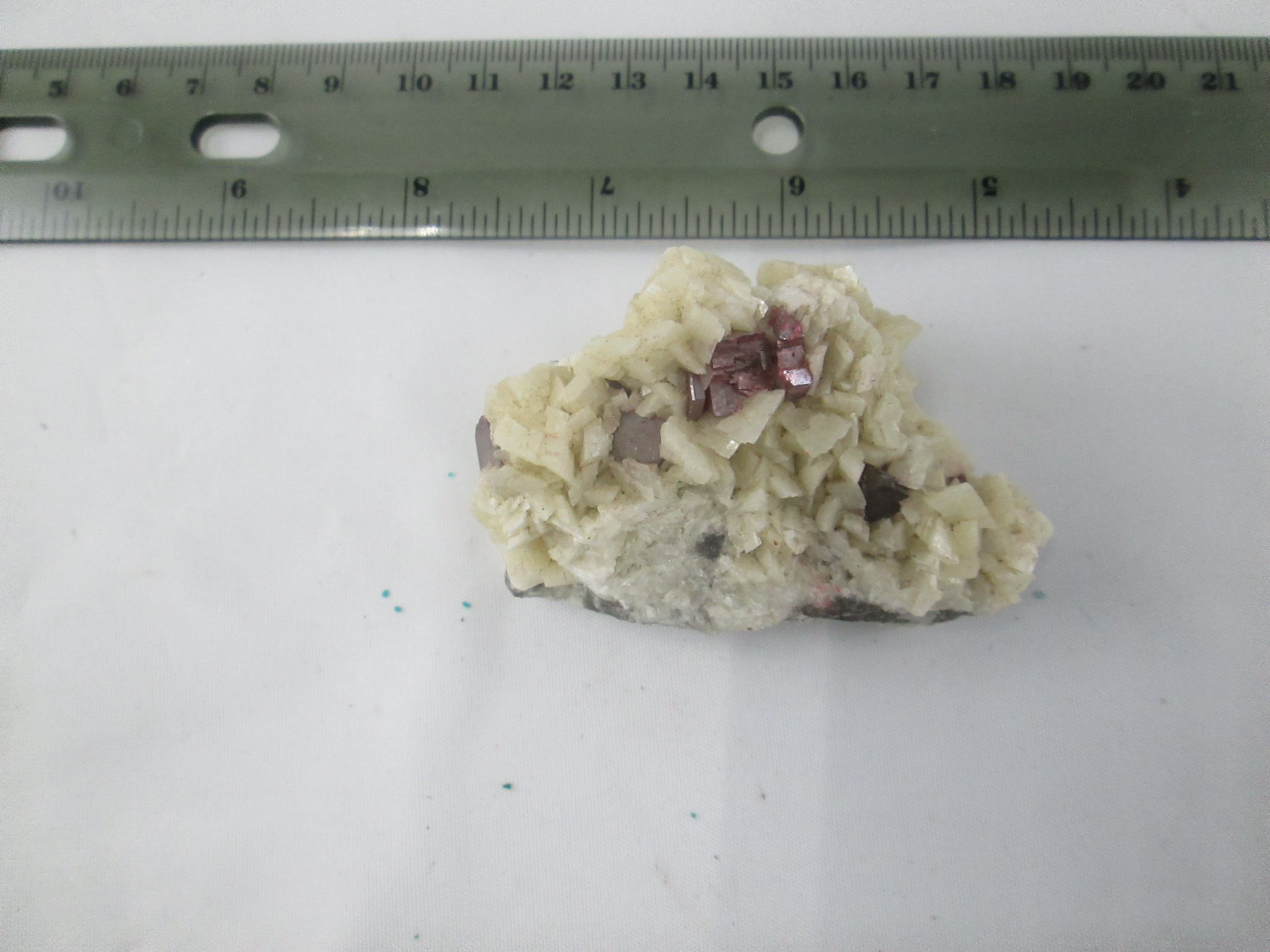 Before your mouth waters with thoughts of that tasty sweet treat in your head, let us burst your bubble right away and emphasize that a cinnabar has nothing to do with cinnamon or buns. Rather, a cinnabar is a mineral that contains a chemical configuration of HgS.

It also is the only important ore of mercury, and has a vibrant red hue. History has shown that its bright red color has led many people from all corners of the globe to utilize it as a pigment and in different jewelries and decorative ornaments

Many, many centuries ago, it was crushed into a fine powder to produce a pigment that was called vermilion. Aside from being used extensively in both art and other ornaments, it was also used as an additive to cosmetics. And to this very day, it is still being utilized in artists’ paints. However, it is usually replaced by synthetic and less toxic pigments.

How is Cinnabar Formed?

Cinnabar is considered to be a hydrothermal ore that is hurled from rising hot waters and vapors as it goes through cracked rocks. It is formed at surface depths where the temperature has been found to be less than 200 degrees Celsius. Cinnabar normally develops in minerals that surround recent volcanic activity. However, it can also be found in places that are near hot springs.

Cinnabar is cast as coatings on surfaces of rocks and as fillings of fractures. Although it does not happen as often, cinnabar can also be deposited in pore areas of sediments. It is typically huge in habit and is seldom discovered as well-formed crystals. Other sulfide minerals are usually located that are linked to cinnabar. These can include the likes of pyrite, realgar, marcasite, and stibnite. Gangue minerals linked to cinnabar include dolomite, quartz, barite, and calcite.

The majority of the mercury supply in the entire world is taken from the mineral itself. The primary producers of cinnabar today are the United States, China, Spain, Serbia, Italy, and Slovenia.

What are a Cinnabar’s Properties?

If you did not notice it right off the bat, the most prominent characteristic of cinnabar is the bright red hue that it displays. Its vibrant color allows it to be pinpointed very easily when you are out in the field and people who come upon it are almost immediately fascinated by it.

A cinnabar holds a Mohs hardness of 2 to 2.5. It can be pulverized rather easily into a very fine powder and has a particular gravity of 8.1 — this is actually strangely very high for a mineral that is not metallic.

A cinnabar’s luster goes from dull all the way to adamantine. Samples that feature a dull luster are normally huge and contain loads of impurities. On the other hand, samples that are adamantine are commonly crystals that are actually very rare.

What are the Uses of Cinnabar During Ancient Times?

Thousands of years ago, people started using cinnabar as pigments in many parts of the world such as Greece, Spain and the Mayan countries of South America just to mention a few. It was not before long that countries that had active volcanoes came upon cinnabar and realized its significance and use as a pigment. Akin to many other minerals that featured a red color, cinnabar was at times also referred to as “dragon’s blood” during those olden times.

The Ancient Romans produced many paintings and adorned ornaments and statues as well as their faces with powdered cinnabar that was combined with egg yolk or even plant gums.

The Mayan people utilized the mineral to embellish burial chambers as well as the sarcophagi. In fact, cinnabar was used on the dead bodies of significant members of Mayan society.

Over in India, women placed vermilion in a dot on their foreheads to point out that they were married. As a matter of fact, this ritual is still being practiced in some parts of India today. However, rather than cinnabar, what they now use is sindoor, which is composed of lime juice and turmeric.

In Ancient China, people there utilized cinnabar to create their famed red lacquers and unique inks. This special technique for producing vermilion was first established in China during the eighth century.

After cinnabar was unearthed at the volcano, it was then pulverized into a very fine powder and combined with other liquids to create different kinds of paint. The vibrant red pigments referred to as vermilion or at times, “Chinese red” were initially produced using cinnabar.

The use of cinnabar in lacquer, however, has since waned mainly because of its toxicity. These days, most items that are created and marketed under the “cinnabar” name has been created to be a lot less toxic. However, there remains a fair volume of antique items that are made using toxic mineral cinnabar.

What are the Uses of Mercury?

As mentioned above, cinnabar is the only important ore of mercury. Mercury is used for many things but because of its high toxicity, its usage and application has decreased in areas where there are alternatives available.

One of mercury’s primary uses can be found in the production of chlorine and caustic soda which actually needs large volumes of mercury. There also used to be a time when mercury was used for instruments that measured temperature or pressure like thermometers and barometers. It was also utilized in gravity switches for the reason being that it flowed rather easily as a liquid and was also able to conduct electricity. However, the usage of mercury in cases like these has long been halted.

These days, mercury can be found being used in batteries as well as light bulbs, although their disposal is strictly regulated. Mercury’s toxicity found some use as it was utilized to safeguard seed corn from fungus as well as to deworm elements that were used in making felt.

It was initially used in dental amalgam but has since been exchanged for polymer resins. In nearly all of its use, mercury is being switched up with alternatives that are considerably less or nontoxic.

What are the Uses of Cinnabar Today?

Cinnabar these days, which can be found in natural or artificial vermilion, is marketed a lot as artist’s paint. However, this particular paint often comes with a stern warning to avoid ingestion and contact with skin. In the event that some artists want to use safer alternatives, they usually go with cadmium red.

There are a lot of rock collectors that are keen on including cinnabar specimens in their collections, mostly because its colors varies substantially and it goes from orange all the way to a deep purplish red.

Mostly though, cinnabar these days are used for the production of mercury. In order to do this, the ore is heated which allows the mercury to precipitate. It is then cooled and condensed to produce liquid mercury. It needs to be handled with extreme care and caution since it can be easily absorbed by the skin and can release toxic vapors.

What are the Cinnabar Stone’s Metaphysical Properties?

Cinnabar has potent metaphysical properties. It has gained a reputation as a stone that can help with the production of wealth, thus earning the moniker “The Merchant’s Stone.” It is said that the energy that this stone brings can help reel in wealth into your business.

This stone is also known for triggering mystic vision, and this may embolden you to finish your purpose for incarnating at this time. It is also known to be a stone of transformation and of magic as well as that of both alchemy and healing. It helps boost communication and brilliant thinking, and may be utilized to bring into line all of the chakras and emancipate dread and bitterness.

The Safe Use and Handling of Cinnabar

Information regarding just how dangerous and poisonous cinnabar is remains vague. Experts however, strongly suggest that we restrict our exposure to all compounds of mercury, including inorganic mercury.

People that are using cinnabar are given stern warnings to not inhale the dust. The mineral must neither be ingested or licked (really, why would you lick a stone in the first place?).

Aside from that, experts also say that cinnabar must not be heated as it might spark the release of mercury vapor into the air. It is considered to be a serious problem as the vapor is definitely more harmful than the mineral itself.

Opinion regarding touching cinnabar remains divided so it is prudent to just wear gloves when handling it.

Without a shadow of a doubt, cinnabar is a striking and stunning mineral with uses that are unique, artistic and interesting. The legacy it has left us in the world of arts is undeniable. However, as beloved as this mineral is, even the most ardent rock collectors still needs to be wary of the cinnabar because of its inherent dangers. Any person that comes into contact with it must be armed with the knowledge of safety precautions at all times.