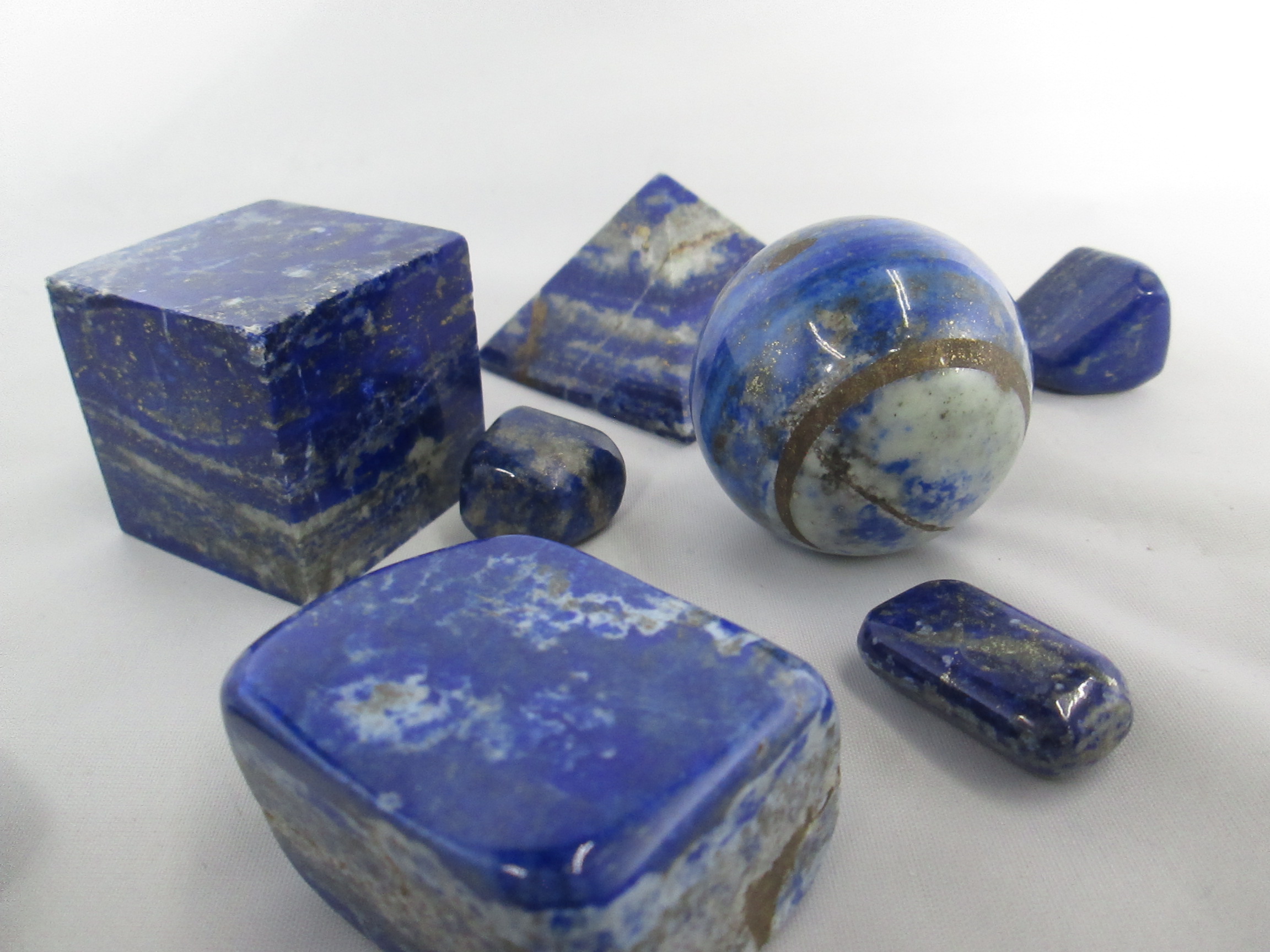 Lapis lazuli is a blue-colored metamorphic rock that has been used as a jewel, as sculpting material and as a decorative piece for many, many centuries. Contrary to what many might think, lapis is not actually a mineral but rather, a rock that is made out of a number of minerals. Its name is actually derived from the Latin word lapis that means, “stone,” and the Persian word lazhuward, which means, “blue.”

Lapis lazuli is primarily mined in the country of Afghanistan. Various parts of the country have been actively mining this rock for many thousands of years.  Badakshan, which is a province in modern-day Afghanistan, is an unforgiving wasteland composed of mountains, and devoid of any greenery. The steep mountain faces go up as high as 17,000 feet and are marked by dangerous ravines. However, in spite of its unfavorable conditions, people still make their way to those parts in search of the azure rock known as the lapis lazuli.

The very same situation held true as early as 700 BC when the region was then called Bactria. The lapis mines where the lapis was unearthed are, to this very day, still operational and are renowned as the oldest commercial gemstone mines in the entire world!

Other corners of the globe where lapis lazuli is also being mined include Chile, Canada, Russia, Argentina, and Pakistan. Some parts of the United States also mine this attractive rock but only in the states of California, Arizona as well as Colorado.

What is Lapis Lazuli Made of?

Lapis gets its vibrant blue hue from the existence of lazurite — which is a silicate mineral that comes from the sodalite group. Lapis is created in igneous obtrusions where either limestone or even marble has been modified because of either contact or hydrothermal metamorphism. Within these slabs, lazurite takes the place of chunks of the host rock and ideally forms within specific bands.

Aside from lazurite, samples of lapis lazuli also have calcite and pyrite. Other minerals that might be present in this particular rock may include sodalite, wollastonite, hauyne, mica, diopside, afghanite, and dolomite. However, in order for a rock to be correctly labeled as a lapis lazuli, it must have that unmistakable blue hue and at the very least, 25% blue lazurite.

The second most copious mineral that is found in lapis lazuli is calcite. It can be very easy to spot it too as it appears as white layers or fractures. It mixes finely with lazurite to create a rock that has the appearance of faded denim, which is the reason why it is at times referred to as denim lapis — a lower grade of lapis that is lighter blue in shade and has white rather than gold streaks.

The History of Lapis Lazuli

The history of lapis lazuli can be traced back to ancient Egypt in 4,000 B.C. where it was considered to be the most extravagant tribute, being unearthed from some of the oldest mines in the entire world.

Lapis was used on the burial ornaments of ancient Egypt’s kings and queens. Of note was the prized golden sarcophagus that contained the body of the famous King Tutankhamen, which was abundantly decorated with lapis.

Lapis was robustly utilized in pendants and other kinds of jewelry. It was also ground up and used as dyes, make-up and even as components of different kinds of medicinal potions. The arid desert of Egypt was where the lapis really stood out as its deep blue hue provided an unambiguous spiritual contrast. Egyptians back then routinely meditated on the gold flecks found in lapis, believing that supernatural entities would come to turn their lives around for the better. Many of the royal clothes back then were also dyed with lapis to convey the god-like status of the wearers.

Egypt, however, was not the only place where lapis was revered. Over in ancient Persia as well as that of pre-Columbian America, many of the natives strongly believed that the lapis offered a strong layer of protection from the evil eye.

During the Greek and Roman times, the lapis was prevalently utilized as a decorative rock. Then, in medieval Europe, the lapis was valued because many people believed it could ward off evil spirits and curry favor from the spirits of light.

Lapis was also believed to be a preferred artistic tool of many great painters, which include Michelangelo, Vincent Van Gogh, and Johannes Vermeer. Lapis was ground up and processed into powder to create the vivid ultramarine pigment that was used in celebrated pieces of art such as “The Starry Night” and the “Girl with a Pearl Earring.”

The Buddhists also held the lapis in high regard, often recommending the stone to people as a way to bring them peace and liberation from negativity.

During the famous Renaissance, the Empress of Russia, Catherine the Great, took one whole room in her palace and decorated the walls, fireplaces, mirror frames and even the door with lapis lazuli.

What are the Uses of Lapis Lazuli?

1) As a Gem and as Decorative Material

Lapis lazuli has gained a lofty reputation for its use as a gemstone, often being utilized in cabochons as well as beads. It is also used as a primary component in creating small sculptures and other decorative pieces that can be the highlight in offices and other spaces.

Lapis is also suitable to be used in jewelry such as earrings and pendants where abrasion is not likely to happen. It should be stored in different containers to make sure that the stones do not rub against one another.

For many centuries, lapis lazuli has been extensively utilized as a mineral pigment. The impurities of pieces of lapis are cut out before they are ground up until it turns into a powder, which is then combined with oil or another component to create a suitable kind of paint.

Higher-class pigments can also be created from lapis lazuli. Removing the calcite and dolomite from the powder — which actually mitigates the color — is done with the use of mild acid. Then, the material is processed even further to take away pyrite as well as other minerals. The result of all this is what is called as “ultramarine blue,” which is a very expensive pigment that was used exclusively by accomplished artists who were commissioned to produce artistic pieces by wealthy clients. Today, ultramarine blue is extremely rare and can be bought for as much as $1,000 per pound.

Such pigments have often been used in portraits of the Virgin Mary.

Lapis has long been recommended to executives, psychologists, and journalists, as it is known to promote wisdom and proper judgment in this day and age. It is also known to help lawyers solve cases; aid historians analyze archeological finds and inspire scientists and writers to produce innovative materials.

Lapis lazuli is also known to stimulate the mind’s desire for higher learning, thereby boosting your intellectual skills. It is also often said that it could enhance your memory-retention skills.

4) As a Tool for Bringing About Calm and Peace

The lapis lazuli is considered to be a stone that promotes friendship and harmony in relationships. The lapis is renowned for its ability to bring about peace amongst troubled teenagers, those suffering from Asperger’s syndrome, autism, and even ADD.

5) As a Healing Instrument

The lapis lazuli is especially useful in healing different parts of your body such as the throat, the vocal cords, and the larynx. It also aids in controlling your endocrine and thyroid glands, as well as help overcome the loss of hearing and other health concerns that are related to the ears and nasal passages.

The lapis lazuli is also known to boost your blood circulation and bolster cardiac rhythm. It can also lessen the chances of you experiencing bouts of vertigo and reduces your blood pressure. It can also help relieve you of your insomnia, thereby giving you the chance to get the proper and required number of hours of sleep.

Lapis is also beneficial for your eyes and skin. It can help heal eye infections and also skin bruising and insect bites.

Women suffering from irregular menstruation would do well to use the lapis as it can help relieve the effects of cramps and lumbago. It also works well against migraine headaches.

It can also help your nervous system, relieve the effects of brain disorders, autism, and Asperger’s Syndrome.

6) As a Means to Unlock Latent Psychic Abilities

Lapis lazuli is a powerful and intense tool that holds the key to opening your third eye and stimulating your pineal gland. It is a very potent stone to have on your as it is believed to be capable of relieving your anger and warding off negative vibes. It can also ease away your frustrations that are the source of your anger.

With the lapis lazuli, you can trigger your psychic abilities and powers, as this would stimulate your pineal gland, thereby opening your link to the spirits. With your third eye already opened, you can now gain augmented visionary skills. The lapis also works very well for spiritual growth and development.