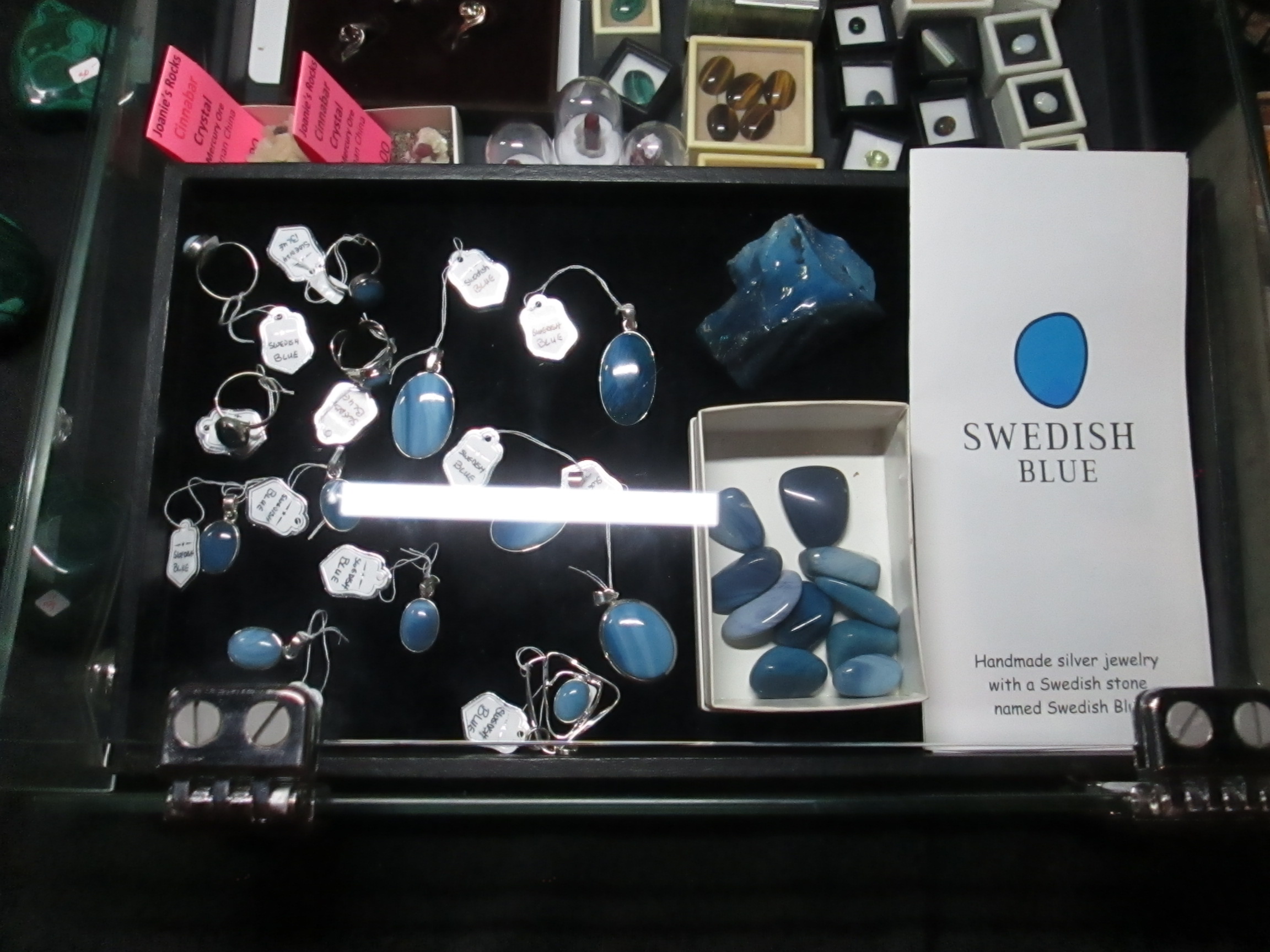 When we were in Denver this past September, we met a couple from Sweden who are silversmiths and worked with a stone they called Swedish Blue.

The stone is also known locally as Bergslagsten, which basically means it came from the slag pile of the medieval foundry in Bergslagen Sweden.

The slag gets its color from the impurities in the ores being processed at the foundry and is this case tended to be the blue color of Sweden.

The stone is then cut with attention being paid to the color variations in the stone itself. A practiced eye and skill can bring out the best aspect of any particular piece. After the stone is cut and polished it is framed with silver by my Swedish silversmith’s, resulting in a handsome piece of jewelry that speaks to and of Sweden, past, and present.

In the photo, you will see at the upper left a “not for sale” sample of the Swedish Blue slag, before cutting. Note the color variations that flow through the body of the stone. These variations are selected and enhanced by the stone cutter and then framed in silver.

There are four rings, priced at $81 each for three and $69 for the fourth.

There is one triangular pendant priced at $90

We are considering consigning this material to others for the holiday season, as we do not have any scheduled shows until Spring. If perchance one or more of the items are calling out to you – call out to us via email to enetwal at gmail.com. Let Earl know you saw it here first on the blog and you will get 10% off.

But hurry, it may be all gone in an instant if we decide to consign.

Joanies Rocks have been investing in new inventory for our customers. As a fledgling business, we have a ways to go but are pleased to have had a successful buying trip to Denver this fall.

Among the new material is an enhanced selection of Labradorite, one of our most popular items, a nice selection of malachite free forms, our first assortment of Amazonite, and a wide range of Lapis Azuli. More unusual are a selection of Chrome Chalcedony from Kosovo and Red Crater Agate from Turkey.

We also expanded into Jewelry a bit with a number of very nice items from Sweden made of Swedish Blue, we also invested in a nice set of bracelets and even more unusual a selection of Onyx lamps.

Having acquired new material we were eager to take it to market, and we did just that October 5th and 6th at the Rock River Valley Geological Society show in Jefferson Wisconsin.

Last year we shared one of their 6 table booths with another dealer. This year we went Big and took an entire booth and still had trouble fitting all of our new inventory on the expanded real estate.

The good news for our accountant is that we more than doubled our sales from our prior year base. People were so friendly and seemed to love our selections. That was truly gratifying.

One unusual thing was the fact that we had a better Sunday than Saturday, in contrast to our normal expectations of doing 2/3 of our sales on the first day. We also enjoyed the fact that we seemed to have a steady flow of people and sales from start to finish.

The Malachite and Labradorite free forms were among our best sellers, and we were pleased with both jewelry sales and carved animals, angels, skulls, etc. The one newer acquisition that did not do as well was our Lapis Azuli. I personally love Lapis’ deep blue color and hope this is just an aberration. Experience, limited as it may be, is that what sells at one show will languish at another and thankfully vice versa.

For example, at a late summer show in Frederick Wisconsin, we were quite successful selling Thompsonite from the North shore of Minnesota, and it didn’t get a second look in Jefferson.

As we develop our business, we have been investing is static items, such as new table cloths for the Jefferson show and additional lights. We also brought out for the first time a glass case to protect, honor and display our new Swedish Blue jewelry and some of our pricier items such as cinnabar crystals, Wah Wah Red Beryl and other better stones.

We picked up a bracelet stand during a rock swap in Eau Claire and put it to use in Jefferson. It was a great way to display a variety of items while taking up relatively little table space. While the rack in the photo above is still pretty sparse, we filled to four rounds quite well and were pleased with the sales generated.

When we were on our September buying trip to Denver, we met a couple from Sweden. They are introducing “Swedish Blue” to the American market. They have displayed in Tucson and Denver and are the silversmiths complimenting this beautiful material.

The stone itself is actually slag glass, from recently discovered medieval Swedish glass factory long since forgotten. Joan hates referring to it as slag, as the word seems to be unjust when the end result is so pretty.

The prices for this material are a bit higher than anything we have dealt with before, so the jury is out regarding our wisdom in taking this step. However, we are confident that the workmanship, beauty, and artistry will propel future sales.

Another Denver find was Amazonite, with its pale blue-green luster. We met a miner from Colorado who had a nice selection and picked up a few samples that display the crystal. We have carried inexpensive tumble-polished stones in the past, but the raw crystal form appeals to me more. The general tumbled material is a somewhat poorer grade of stone, while the material from Colorado was much better. In hindsight, I wish we have acquired more of this material when we were in Denver.

The biggest lesson I learned about the buying trip was learned at the Jefferson show. We will need to replace what we sold, and although we still have a pretty deep lineup, it would be even better had we spent more time building a relationship with the Amazonite miner and others.

On our next buying trip, we will focus not just on getting good material but on developing a trusting relationship with sources to more expeditiously replenish inventory without the 13-hour car trip it took to get to Denver.